Famous for its Temples, Palaces and rich heritage of the kingdom that Flourished here

Rich in gorgeous landscapes, crystalline waterfalls, awe-inspiring mountains, dense forests, and a generous sprinkling of history and tradition, Tripura is a popular tourist destination situated in North-East India. This land-locked state nestled at the foot of the Himalayan Mountains has a long historical legacy behind it. Tripura is more than just its breathtaking beauty; it is an illustration of a long and varied legacy of history and tradition, thus promising you a holiday you won’t

Places to be around Tripura

If you want to add some thrill to your adventure than this reservoir of large flora and fauna is a place you must be. It is also home to a variety of wildlife especially birds and various types of animals, this place is not just a wildlife sanctuary but also an academic and research centre. There are also quite a few lakes lakes present here, where boating facility is available.

The palace was previously located near Agartala but the earthquake destroyed it in the year 1897. It was reconstructed in 1901 AD by the Maharaja Radha Kishore Manikya. A spectacular Mughal garden is the main attraction of this palace which comprises musical fountains, artificial lakes, verdant grassy blanket and the royal existence of majestic ancestry.

It is a unique place which bears no resemblance to any other marvel in the country in terms of sheer grandeur and artistry. It is located about 180 km from Tripura's capital, Agartala, and just about 8 km from the sub-divisional headquarters of Kailasahwar town. Unakoti means one less than a Crore which indicates that number of rock carvings and murals of Hindu deity are available here.

This temple is another piece of art and is situated in the center of the Ujjayanta Palace grounds. The exterior exhilarates beautiful Islamic architecture and the interior part of the temple is beautifully decorated in the Hindu Style. Lord Jagannath is the main deity of this temple but Balaram and Devi Subhadra is worshipped along with Jagannath Dev.

Are you indulged in history and are interested in finding out the richness of Tripura than you must be here. Tripura Government Museum was established in the year 1970 for exhibiting Tripura culture and heritage. This museum is enriched with the unique collection of stone carvings, archeological objects of Tripura, old coins and many more.

The picturesque spectacle of the Chittagong hills assaults the senses of each and every onlooker. The hills comprise of mini mountains with multiple valleys and a small canyon, with 7 rivers meandering across the valleys.

The Bungalow adjacent to Kunjaban palace situated on a hillock was originally a kaccha house where Tagore stayed during his visit in 1919. The pucca construction was subsequently built and given the name of Malancha Niwas.

Treasure house of Hindu and Buddhist Sculpture. It dates back to 8th and 9th centuries. Beautiful images scattered in an area of about 10 Sq.Km. have been found. The images, terracotta plaques and sealing found here reflect survival of heterodox creeds and sects representing both Hinduism and Buddhism. Colossal stone images of Avolokiteshwar and Narasimha have been found here.

The weather of Tripura is quite pleasant throughout and is quite cooler than the mainland temperature. The winters here is the best season to visit as its pleasant and ideal for sightseeing. They receive heavy rainfall and so avoiding visiting it during the monsoon is smart.

Tripura has an airport in the capital, Agartala and just 5 mins from the main city. It is also connected to Kolkata and Guwahati by direct flights. The nearest railway station is Kumarghat which is 140kms away from Tripura. The Kumarghat station is connected to the railheads of Kolkata, Delhi, Indore, Chennai and Bangalore. Agartala is 44 Kms from Teliamura, 109 Kms from Manu, 133 Kms from Kumarghat, 295 Kms from Silchar, 300 Kms from Aizawl, 313 Kms from Dwarband, 459 Kms from Shillong, 557 Kms from Imphal, 558 Kms from Guwahati. 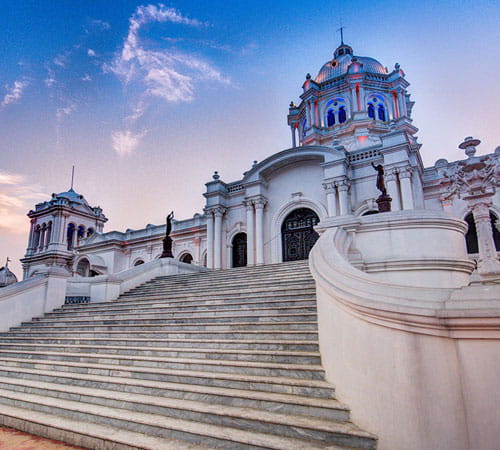 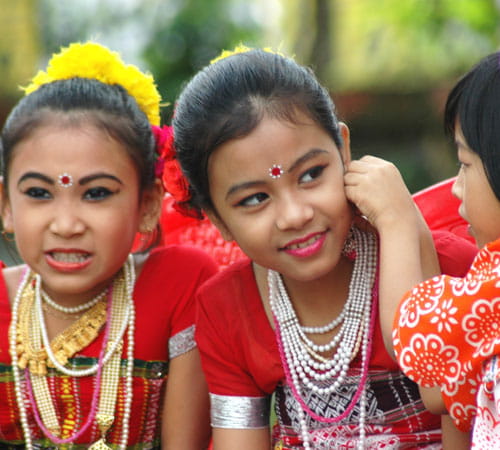 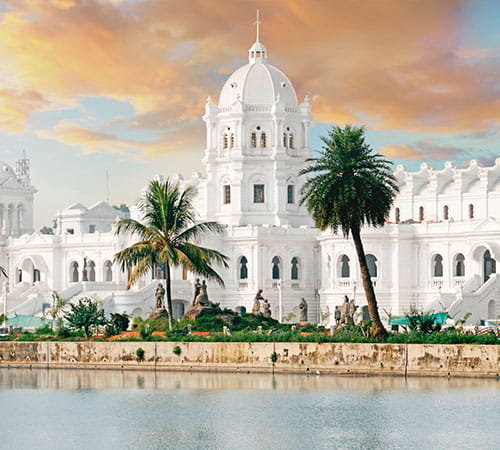